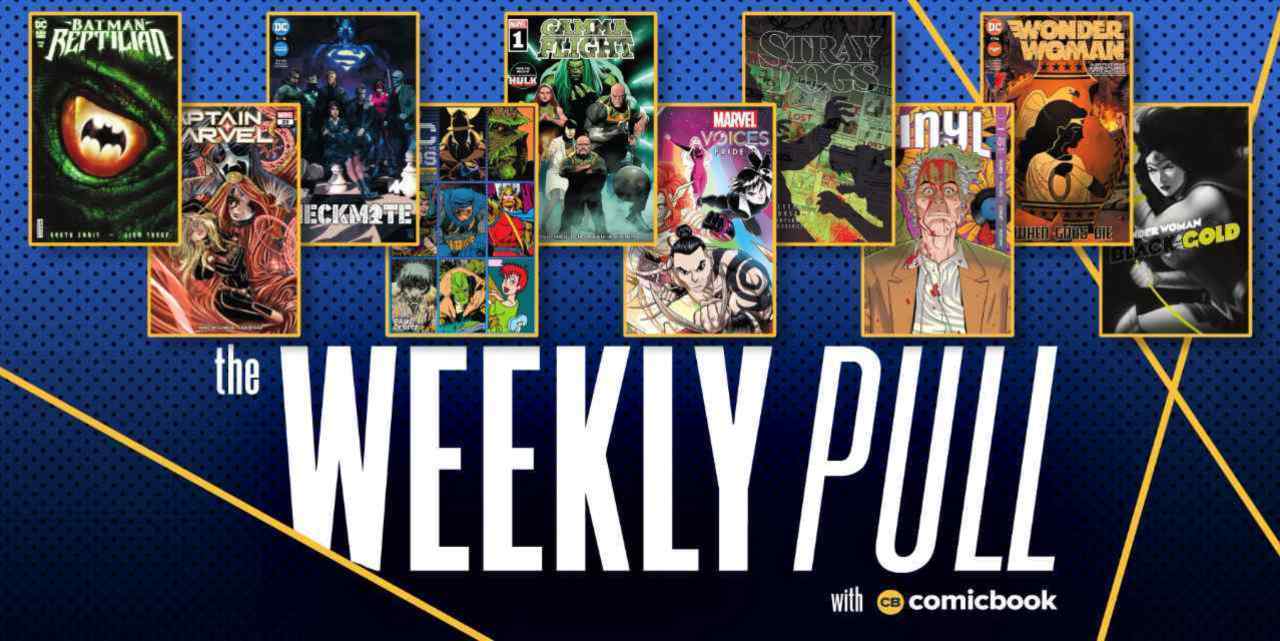 It’s almost another new comic book day, which means new releases hitting stores and digital platforms. Each week in The Weekly Pull, the ComicBook.com team highlights the new releases that have us the most excited about another week of comics. Whether those releases are from the most prominent publisher or a small press, brand new issues of ongoing series, original graphic novels, or collected editions of older material, whether it involves capes and cowls or comes from any other genre, if it has us excited about comic books this week, then we’re going to tell you about it in The Weekly Pull.

This week, DC launches a new Batman Black Label series and releases a double dose of Wonder Woman while Marvel Comic celebrates Pride. There’s also a new volume of DC Through the ’80s, the launch of the new Image Comics series Vinyl, and more.

What comics are you most excited about this week? Let us know which new releases you’re looking forward to reading in the comments, and feel free to leave some of your suggestions as well. Check back tomorrow for our weekly reviews and again next week for a new installment of The Weekly Pull.

Garth Ennis is a titan among comics writers, and he doesn’t take on superhero work lightly. You know that if he’s putting out a Batman book for DC’s Black Label that it’s going to be something special. He’s teaming with Liam Sharp, who’s hot off of working on The Green Lantern, for a story about a monstrous predator lurking in Gotham City’s shadows. What’s scary enough to strike fear into the hearts of villains accustomed to fighting the Dark Knight? Find out in Batman: Reptilian #1 this week. — Jamie Lovett

Captain Marvel is determined to prevent the doomed future she just witnessed, and she’s going to have to seek out some unexpected help to get it done. That said, it might not be the best idea. Actually, scratch that, it’s probably a terrible one, but the desperation is growing, and despite every magic-user saying it’s not a good idea, Carol is undeterred. Captain Marvel’s quest for magic has taken her to some unexpected places, and we cannot wait to see what happens next. — Matthew Aguilar

Thus far, Brian Michael Bendis has spent most of his creative energy on Superman, the Justice League, and other straightforward superhero endeavors since signing with DC Comics. This week, he teams with frequent collaborator Alex Maleev to launch a new Checkmate series, diving back into the world of shadows and spies after Event Leviathan. Bendis and Maleev are among the all-time great comics creative teams of the 21st century, having broke big working on Daredevil at Marvel Comics. Can they reach those heights again, this time playing the shadowy corners of the DC Universe? Readers will start to find out this week. — Jamie Lovett

DC Through the ’80s: The Experiments

Whether you’re a diehard or casual DC Comics fan, you’d probably agree that the 1980s were a particularly significant time for the publisher, with titles that revolutionized the way comic storytelling is told today. The publisher’s new collection, The Experiments, highlights some of those game-changing and unexpected entries, from household names like Watchmen, The Sandman, and The Dark Knight Returns to lesser-known — but still monumental — moments for the publisher. This omnibus really showcases the majesty and bizarreness of what the DC universe is capable of, and it feels like a collector’s item in every single sense of the word. — Jenna Anderson

The Immortal Hulk may be drawing to a close, but its impact at Marvel Comics is bound to reverberate for years to come, including changes to an expansive supporting cast highlighted in the new miniseries Gamma Flight. The new team narrative focuses on the (mostly) superpowered individuals originally tasked with taking Hulk down who found themselves fighting alongside him by the end. Writer Al Ewing has ensured that permanent C-listers like Puck, Titania, and the Absorbing Man were all made much more sympathetic in his own series with aspirations and motives that are genuinely human. Set that collection of distinct personalities side-by-side with the horrors of gamma and a military out for revenge, and readers have quite an adventure to look forward to. In addition to following up with many cult-favorite members of The Immortal Hulk’s supporting cast, Gamma Flight is also well-positioned to establish a new status quo for all gamma-infused characters in the wake of Ewing’s extraordinary Hulk run. Fans of it should make sure not to miss Gamma Flight. — Chase Magnett

Marvel’s first Pride anthology, Marvel’s Voices: Pride #1 features the work of LGBTQ+ creators and illustrators telling stories that feature Marvel’s roster of LGBTQ+ characters all in celebration of not just Pride month, but the rich stories that the characters bring to the Marvel universe. The volume features 12 all-new stories featuring beloved characters such as Nico Minoru, Black Cat, Northstar, Elektra, and more. As is the case with all of Marvel’s Voices books, these characters deserve to have more of their stories told, but you definitely don’t want to miss this one. — Nicole Drum

Stray Dogs has been one of the most pleasant (and in some ways disturbing) surprises of 2021, and now it’s time for the big finale. This series has specialized in gut-punches when you least expect them, and odds are the same will be true here, as the dogs attempt to overtake the person who stole their lives from them without them even knowing it. Stray Dogs looks to stick the landing on a stellar murder mystery, and I’m betting it lives up to the hype. — Matthew Aguilar

Following on the heels of the relentlessly strange Plastic, writer Doug Wagner and artist Daniel Hillyard have prepared another deranged story starring another serial killer, Walter, at Image Comics. Hillyard’s art was my initial draw to this collaborative team as it excels in exaggerating characters and their settings just enough to match the absurd nature of what’s on the page. That may require a lot of stretching for this story of Walter attempting to save his best friend (and FBI pursuer) from a kidnapping cult of flower children. Even having paid attention to all of the solicitations and press surrounding Vinyl, it’s unclear how all of those pieces will come together in one comic book, but it certainly sounds like a wild ride to find out. Whether it’s for the ludicrously engaging plot or Hillyard’s outstanding pages, Vinyl could be Image’s sleeper hit of 2021 and I’d recommend finding out for yourself when issue #1 hits the stands this week. — Chase Magnett

Diana’s left Asgard, but the adventure is far from over and that’s exactly why you need to check out this week’s Wonder Woman #774. Diana heads into the correct afterlife this week but finds herself faced with a shocking turn when she discovers that Olympus has fallen. Conrad and Cloonan’s Wonder Woman run has been nothing short of phenomenal thus far and with the story moving forward to this next challenge and this next path in the afterlife, the story is only getting richer and more engaging. This is a must-read for Wonder Woman fans. — Nicole Drum

One of the best comic trends in the past year has been the resurgence of titles like Batman: Black and White, with more characters getting anthology stories told in a somewhat monochromatic context. With this week’s Wonder Woman: Black and Gold # 1, the entirety of DC’s trinity has now gotten that treatment, and it’s safe to assume that this issue will be an excellent one. With stories that include a moody tale from Becky Cloonan, an Etta Candy adventure from Amy Reeder, and a significant family reunion from AJ Mendez and Ming Doyle, there’s definitely the promise of a lot of compelling storytelling for the Princess of Themyscira. Between the concept, the creative teams, and the stories they seem to be telling, it looks like Wonder Woman: Black and Gold #1 could be a triumph. — Jenna Anderson