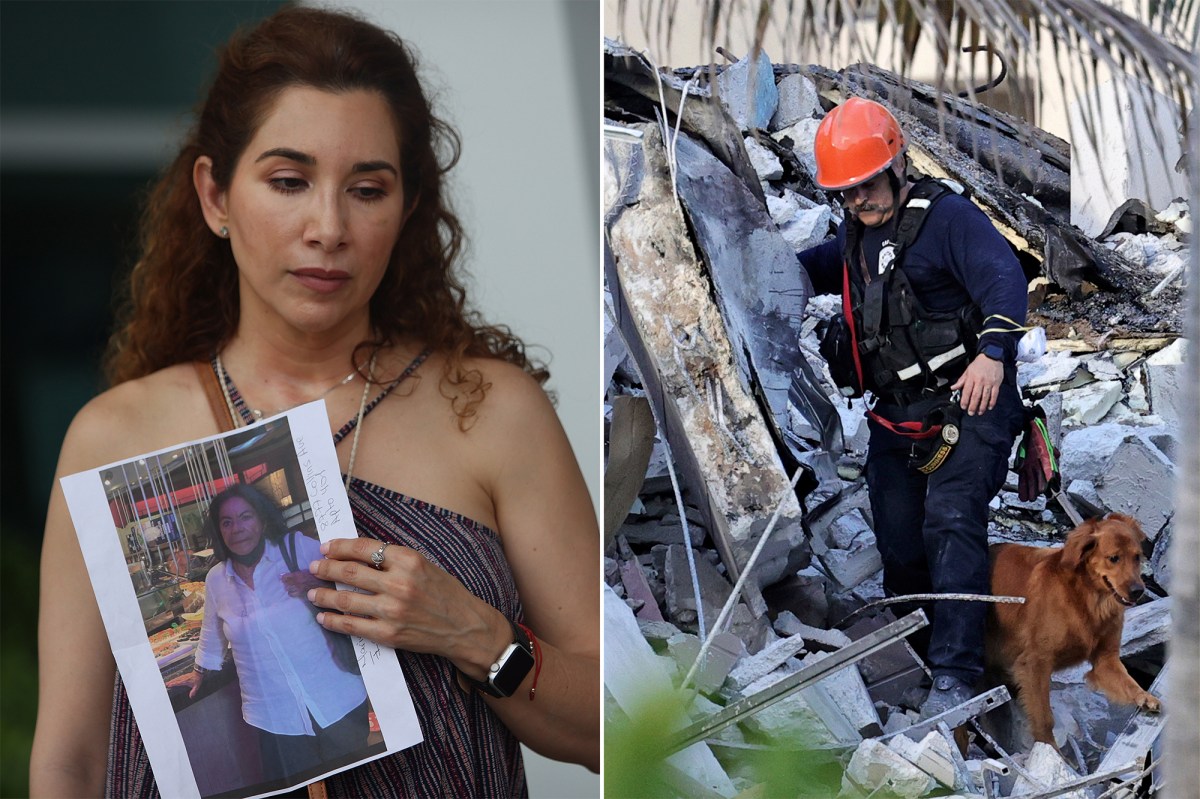 At least one person was killed, 10 injured and a staggering 99 people are still missing in the aftermath of a 12-story apartment building that collapsed and “pancaked” early Thursday near Miami, prompting a massive search-and-rescue effort, officials said.

The ocean-facing portion of the 136-unit Champlain Towers South Condo on Collins Avenue in Surfside, just north of Miami Beach, collapsed about 1:30 a.m., leaving a mountain of rubble and trapping residents asleep in their beds inside.

Miami-Dade County Fire Chief Ray Jadallah said during a news conference that 55 units collapsed, and that 35 residents were rescued from the building. Two people were removed from the rubble.

One person died, 10 people were treated at the scene and two were taken to a hospital, he said.

In a briefing later in the afternoon, officials said that 102 people had now been accounted for — but that the number of missing remained at 99.

The deadly collapse sparked, simultaneously, a police probe into the cause and a massive search-and-rescue effort to reach any survivors possibly buried beneath the debris.

Miami-Dade Commissioner Sally Heyman told CNN that it was unclear if all of those unaccounted for were in the building when it collapsed because of “vacations or anything else, so we’re still waiting and unfortunately the hope is still there, but it is waning.”

She said it was unclear if all 99 people were in the building when it collapsed because of “vacations or anything else, so we’re still waiting and unfortunately the hope is still there, but it is weaning.”

The buildings’ residents include both families who live in Surfside year-round and snow birds who winter in the Sunshine State.

“The rest of the search-and-rescue efforts has been done by manpower on the outside, search on the barrier quarters, also with drones and with dogs. It has shifted now or started to shift to recovery,” Heyman added.

But those desperate efforts were temporarily put “in pause mode” as a coastal thunderstorm blew through the area, Heyman said.

The weather-related delay further slowed an already cautious search for survivors, with responders wary of further collapse in the devastated building.

Also complicating the search was a small fire that broke out at the scene Thursday afternoon, though the blaze was being brought under control around 2 p.m., according to Local 10.

It was unclear what sparked the fire.

Authorities said more fatalities are expected in the collapse, which was captured on stunning surveillance footage. It was not immediately clear how many people lived in the tower.

Gov. Ron DeSantis said local and state officials are hoping for additional rescues but added that “we are bracing for some bad news just given the destruction that we’re seeing.”

Miami-Dade Mayor Daniella Levine Cava told reporters that a “massive search and rescue is underway,” adding that “we know we are going to do everything we can possibly to identify and rescue those who have been trapped in the rubble.”

Surfside Mayor Charles Burkett said: “This is a horrific catastrophe. In the United States, buildings just don’t fall down.”

Burkett said the part of the building left standing has been cleared. He added that the building was undergoing roof work, but he couldn’t say whether that was a contributing factor to the collapse.

“Apparently when the building came down it pancaked, so there’s just not a lot of voids that they’re finding or seeing from the outside,” he told NBC’s “Today.” “It looks like a bomb went off, but we’re pretty sure a bomb didn’t go off, so it’s something else.”

The collapse kicked a massive cloud of dust into the Florida air, coating cars up to two blocks from the building.

Frank Rollason, director of Miami-Dade Emergency Management, told the Miami Herald that rescuers were desperately trying to get a trapped child out of the garage shortly after 8 a.m. after she was found by a Miami-Dade Fire Rescue dog.

The searchers believe the child was with her parents, who are deceased, Rollason said, adding that “it’s bad.”

In another case, rescuers saved a mother and her child, but the woman’s leg had to be amputated to get her out, he said.

“Everyone who is alive is out of the building,” Rollason told the paper, adding that more than 70 of the 136 units have been destroyed or damaged.

Jennifer Carr was asleep in a neighboring building when she was jolted awake by a loud boom she initially thought was the rumble of thunder.

When her building’s fire alarms began to sound, Carr and her family raced out to the street to find utter chaos.

“It was devastation,” Carr said. “People were running and screaming.”

Surfside Commissioner Eliana Salzhauer said dogs have been brought in to sniff for survivors, the Herald reported.

“They aren’t turning up very much. No one is celebrating anyone being pulled out,” she said.

Earlier, firefighters were seen pulling a boy from the debris and placing him onto a stretcher, NBC Miami reported. A CBS Miami reporter tweeted that the boy was around 10 years old.

A source told CBS Miami that the person killed was a woman.

Several people have gathered at the town’s community center, where the Red Cross is helping those awaiting word about missing loved ones.

Levine Cava said “cause unknown” when asked about what led to the collapse, adding that the county’s Fire and Rescue Department was taking the lead in rescue operations, the Miami Herald reported.

Salzhauer said the building was beginning its 40-year recertification, the Miami Herald reported. She said the roof was being redone, but that it is unknown if any construction activity contributed to the disaster.

Heyman told the paper that multiple people have been taken to nearby hospitals.

A source involved with the county’s response told the outlet that the portion of the building that collapsed contained 45 units.

Firefighters used truck-mounted ladders to reach residents trapped on balconies and believe some people may be trapped in the rubble, CBS Miami reported.

The sprawling complex — which was built in 1981 and where units sell for up to $2.8 million — is just one block from Jared Kushner and Ivanka Trump’s home, Yahoo News reported.

One witness who was on vacation with his family told Fox News he was next door when he heard what sounded like a tornado or earthquake.

“It was the craziest thing I ever heard in my life,” he said, adding that he believed much of the building was occupied when it collapsed about 1:20 a.m.

“What I can tell you is the building is 12 floors. The entire back side of the building has collapsed,” Cruz said.

Chilling images and footage from the scene show piles of rubble and debris surrounding the area just outside the building.

Santo Mejil, 50, woke up when his wife called from a unit on the ninth floor of the south condo, one of three buildings that comprise the Champlain Towers complex.

“She said she heard a big explosion. It felt like an earthquake,” Mejil told the Miami Herald about his wife, an overnight caretaker for an elderly disabled woman.

As he described rushing over to the site from their home near Miami International Airport, his wife called.

“They’re bringing you down?” he said, tears welling in his eyes. “Thank God!”

One witness shared video of the aftermath on social media, saying he had been staying at a nearby hotel and had to be evacuated after the collapse, NBC Miami reported.

“The building, one of these huge buildings, gone, right there beside us, the craziest thing I’ve ever heard in my life,” the man says in the clip. “Look at the building, it’s gone.”

Another witness described the scene of destruction.

“I was able to just see probably a third, if not half of the building literally collapsed,” the witness told the news outlet.

“I just can’t put into words, it looks like a bomb hit, it looks like something in one of these Third World countries that just literally collapsed, like a pancake straight down, and there’s just an incredible pile of rubble,” the person added.

A third person, who lives in a building next door, said he felt the collapse.

“The building shook and then I looked out the window and you couldn’t see, I thought it was like a storm or something coming in. When the dust cleared, the back two-thirds of the building was gone, it was down to the ground,” he told CBS Miami.

And another witness said he was strolling with his brothers and their dog in the neighborhood when the structure came down.

“Basically we heard a really big rumble and we thought it was a motorcycle, you know, and we turned around and saw a cloud of dust just coming our way. We were like what is going on,” he told the outlet.

“We went rushing toward it with shirts over our faces and the security guard came out and we were like, ‘What happened?’ and she said the building collapsed.”

She said her brother, sister-and-law and 16-year-old niece lived on the ninth floor.

Chi, a nurse practitioner, said she was able to speak to her niece before her emergency surgery at Ryder. She said the teen recalled being awoken by her mother to a shaking building, then had the sensation of the floor collapsing.

“She felt the building shake,” Chi told the paper. “Then everything collapsed.”

Chi said her sister-in-law, a psychologist, also was brought to Ryder but that she doesn’t know the whereabouts of her brother, an attorney.

She said leaks were a chronic problem in the building, where her father has owned the unit for 30 years.

“The last time I was there, I looked at him and I said: ‘I am serious,’” she recalled. “‘This building is going to collapse.’”

A South Florida-based home insurance inspector told the Herald that she had visited the building in February 2020 to verify impact windows and doors for a client.

She said the building, which was constructed with reinforced concrete, should not have collapsed the way it did.

“As someone who has been in this business for years, it defies logic,” she told the paper. “It defies everything that we know.”

According to Miami Real Estate Trends, units in the building range in price from $409,000 to $2.8 million.

Anyone who has unaccounted for relatives is asked by Florida officials to call 305-614-1819.